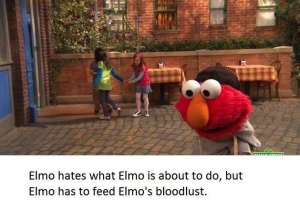 Remember Sesame Street? Of course you do. The colorful puppets, songs, and memorable characters have educated and entertained millions of children. Many people learned to speak English by watching Sesame Street and there are some who otherwise wouldn’t have learned to read or count.

It’s too bad that, in the ‘90s, Sesame Street experienced a bloody coup and now finds itself ground under the fuzzy heel of a brutal dictator.

Those of you who grew up in the ‘90s may remember some of the changes that beset Sesame Street during that time period. The biggest one was a small, red puppet name Elmo who, narcissist that he was, always referred to himself in the third person.

At first, Elmo appeared only occasionally, but after a year or so, some of the other puppets began to disappear. Oscar, the Cookie Monster, and even Big Bird were rarely seen. And there was more Elmo. A lot more Elmo.

Elmo started showing up in practically every sketch, song, or other segment and the likes of Grover and the Count slowly went away. If you look closely, you can see Elmo handing out tiny copies of his manifesto to the other muppets and, in a rare deleted scene, using brutal interrogation techniques to teach Ernie to count to ten.

It was truly becoming Elmo’s World.

Then, a lot of the Muppets started to disappear. There came a time when Prairie Dawn, the Amazing Mumford, and others went away entirely. Mr. Hooper died under suspicious circumstances and Gordon was silenced. New Muppets—Zoe, Telly, and Lil’ Stalin— marched through the streets and indoctrinated the children with their message of a new world order.

As is the case with most hostile takeovers, the evidence was largely hidden away and destroyed by the powers that be. A great wall was built and people, Muppets, and information alike were kept inside (ever notice how no one on Sesame Street seems to walk beyond those fences in the background?)

The worst of it was the effect on the children; ever noticed how, every few years, Sesame Street gets a completely new crop of youngsters to interact with the puppets and teach important lessons? It’s only a matter of time before those kids learn too much.

No one said it better than George Orwell: Today’s episode was brought to you by the number twelve. Twelve voices were shouting in anger, and they were all alike. No question, now, what had happened to the faces of the Muppets. The Tellitubbies outside looked from Muppet to man and from man to Muppet, and from Muppet to man again; but already it was impossible to say which was which.”