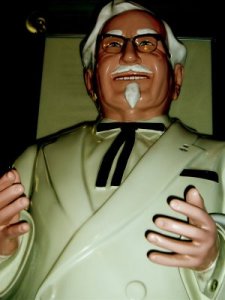 During my dabbling in the sciences, I’ve learned three important facts: clowns cannot breathe in space, tamales should only be consumed orally, and nature is full of symbiotic relationships. The hippopotamus relies on tiny birds to keep its back clean and ambrosia beetles carry and plant a nutritious fungus that eats a tree’s interior a serves as a food source. Different parts of nature depend on each other, linked in the near-unending chain of God’s creation. Any reasonable person would assume that the same to be true of fast food.

But that is not that case. I speak from experience when I say that any attempt of multiple fast food chains to coexist can end only in dominance and despair.

For those not already aware, I like fast food. I like it a lot. I’m the kind of person who, if I had the money, would stuff myself with Quarter Pounders and Double Stacks until grease oozed from every pore and each piece of my fecal matter took on the form of a huge, singular, steaming french fry. And like any connoisseur, I soon began to suspect that many of these restaurants were owned by the same organization.

I was right. Taco Bell, Pizza Hut, KFC, Wingstreet, and until recently, A&W and Long John Silver’s, are all owned by Yum! Brands (which is owned by Pepsi.) At first, they existed as singular organisms. But, pioneers of science that they were, the folks at Yum! Brands soon began combining their restaurants, serving radically different kinds of food under the same roof.

It seemed like a dream come true: customers would be able to walk into a Taco Bell/Pizza Hut and order a burrito alongside a steaming slice of pepperoni pizza or get a cheeseburger and a root beer with a side of mashed potatoes and coleslaw from a KFC/A&W. The possibilities would bring a greasy tear to the eye of any fast food denizen.

However, my joy soon turned to fear and confusion as I came to the stunning realization that these chains weren’t morphing together into awesome fast food mega-creatures but were instead eating each other alive! Whenever you walk into one of these combination fast food joints, one of the restaurants is completely dominant; it’s almost like the other restaurant ceases to exist.

I remember the first time I walked into a Taco Bell/Pizza Hut. The walls were lined with edifices of burritos, churros, tacos, and hot sauce. I ordered pizza. And the employees looked at me like I had just ordered a fried infant on a stick. They then informed me that they had no pizza ready and weren’t sure if they had enough sauce and dough to make one. At a pizza restaurant.

The same thing happened at KFC/A&W. I felt the piercing eyes of Colonel Sanders staring judgingly into my soul as I nervously ordered my cheeseburger. The guy behind the counter spat in my face and slapped me, heretic that I was. I walked out of the establishment, dejected, and was forced to anoint my head with gravy as I said my twenty “Hail Sanders” as a penance.

There are no symbiotic fast food relationships. There is only shame, emptiness, and crusty, uneaten pizza toppings.