This post will address a horrendous influence on our children, one potentially more malicious and destructive to the youth than any other form of media, that goes almost completely undetected by parents and society in general. I speak, of course, of cartoon cereal mascots. Think about it. Mascots for children’s cereals don’t just hock sugar-infused corn flakes; they exhibit a disturbing range of mental problems and promote destructive attitudes and behavior.

Do you share my passion for exposing evil and protecting the youth of America? Then join me as we delve into the dark, truly disturbing worlds in which these devilish cartoons live. 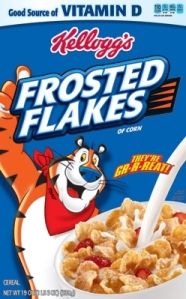 It’s been awhile since most adults have seen a Frosted Flakes commercial, but they’re all pretty much the same: a child is bad at a certain sport and, shunned by their athletic peers, sits on the sidelines and sulks. Truly their existence is a dark chasm of despair from which they will never escape.

But then, out of nowhere, a large, animated Tiger appears. From his…um…flesh pockets, he produces a bowl of sugar-coated corn flakes wreathed in a heavenly light. As the child tastes the cereal, a change comes over their demeanor. And then—huzzah!—they become the star of the sports team and win the love and admiration of their peers! Truly their breakfast is now complete.

Though Tony the Tiger’s infamous catch-phrase and commitment to athleticism seem positive, he sends a disturbing message to children: you are worthless without Frosted Flakes. These commercials teach children to depend on sports for their self-esteem and that they will be unable to play sports without Tony’s magical cereal.

I find it pretty troubling to think about what the kids in the commercials would’ve done if Tony hadn’t arrived just in time. I always picture the little boy on the bench growing up to be an out-of-work, hairy man in a wife-beater undershirt gulping down whiskey like it’s Kool Aid and muttering “if only I’d had some Frosted Flakes…”

By the way, I originally wrote this piece as an assignment for a college class. You wouldn’t believe how many people actually thought I was being serious.